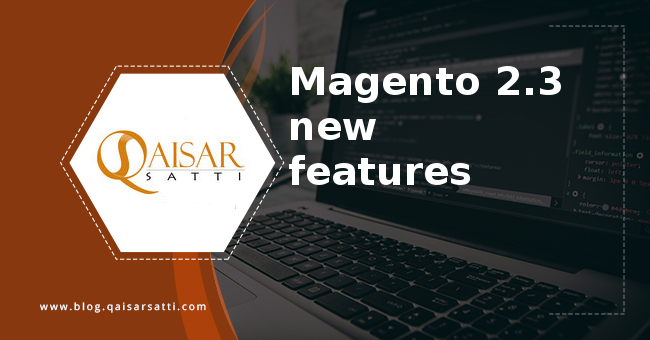 Today we will talk about magento 2.3 new features. Though the magento version 2.3 is not released yet,but magento is planning to release it by the end of this year.During its imagine conference magento announced its plans for the upcoming Magento 2.3 release.Like every major release, there are various exciting features that are set to bring new opportunities for magento clients to sell to their customers, as well as notable back-end efficiencies.

In this article we will look at new features of an enhanced version.i.e magento 2.3.

We will have a brief look at the new features and improvements.

A Progressive Web App is an application,built to take advantage of modern technology features. It provides the feature of caching of data so the website can be used (partially or fully) in an offline mode when internet service is unavailable.
Magento recognizes the multiple benefits to this, and in late 2017 announced its efforts in building what it calls the PWA Studio. PWA Studio will contain tools to develop and deploy a PWA for Magento’s front end. Along with PWA Studio will come a lightweight (not feature-full) demo site. The immediate benefits will be a major increase in front-end performance and a close to 10X increase in speed of onboarding new Magento front-end developers.

GraphQL is a query language for using APIs. With advancement in PWA,it is the need of the hour to get smaller amounts of data and to make fewer API requests.GraphQL’s query language makes this possible by allowing the requestor to request a limited subset of attributes to be returned about an entity (significantly smaller responses) and allows you to chain requests (smaller number of requests).

Magento currently supports REST and SOAP API requests that use Service Contracts. However, to support GraphQL,Magento is writing an entirely new layer that interfaces directly to the Query API. The GraphQL implementation will be the underpinnings on how a PWA frontend will retrieve the data it needs.

Until now the to change the schema of magento database, you can do that using InstallSchema and UpgradeSchema classes where code is written to modify the schema.

Furthermore Magento 2.3 will change the recommended way by implementing a declarative database schema. This technique will try to accomplish multiple goals, some of which were discussed here. Instead of the database schema definitions being fragmented throughout many install and upgrade scripts, it will be fully defined via XML.

Magento is introducing multi-source inventory management to Magento’s core.This will let merchants to natively manage inventory via multiple sources.This will also enhance the shipping methods like the shipping of items and tracking of stock levels from multiple warehouses,as well as inventory within retail stores to support “ship from store” and “pick up in store”.
Furthermore Magento 2.3 will also include new functionality around the reservation mechanism of inventory. Inventory is now reserved within a new table structure instead of the direct decrementing of stock. This will increase performance and prevent database unnecessary locking during the order.

The Asynchronous WebAPI allows a system to execute API calls asynchronously against the Magento REST API.Because of this, integrations don’t have to wait for requests to fully process when making the calls. This improves the performance of integrations that require many API calls, such as a bulk product integration or customer import. A separate status reporting API will be available to check on the progress of the request by ID. This functionality will be available in both Magento Commerce 2.3 and Magento Open Source.

One of the most amazing and waited for feature of magento is Magento’s native CMS.Magento purchased the Blue Foot CMS technology from Gene Commerce and has made that available to its Magento Commerce merchants. Page Builder is a rewrite of Blue Foot CMS using much of the same foundational features and concepts. These features include template creation, drag-and-drop layout management, and a UX that is clean and friendly to use for a non-technical user.
Page Builder will come natively with Magento Commerce 2.3 and will be available for purchase inside the Magento Marketplace for Open Source implementations.

Magento 2.3 will have enhanced security.To protect against malicious users that have obtained a password,in any way magento is implementing two-factor authentication. This extra layer of security will require a user to prove that they have access by sending a security code to their phone or email.Similar to many web applications as it is already implemented across the globe extensively.

Support for ElasticSearch is being extended from Magento Commerce to Magento Open Source. ElasticSearch, in addition to many other usages, powers Magento’s site search capabilities, including faceted search (filtering by attributes).

PHP 7.2 brings new development features, as well as an increase in performance and security.

Because 7.2 is dropping support for mcrypt (PHP’s go to encryption module), the libsodium module will now be used for encryption.

Through community engineering, many improvements in speed and usability of import/export functionality are being added to the Magento core.

Contact DEG to learn how our customized ecommerce solutions can boost engagement and improve your conversion rate.

Magento is adding fine-grained administration access control around the ability to interact with the system cache. Caching provides a much-needed layer of performance for Magento, and in the wrong hands, performance can dramatically suffer.

Magento is switching the technology used for proving that users are humans, not bots, when interacting with a site. Google’s reCAPTCHA tool will now come native.

So after knowing that what will magento 2.3 bring in, it seems really a hard worked and enhanced version.And certainly it will bring more flexibility and versatile features in magento.

Right then this article is purely informational.I hope it will serve its purpose.I am always open to queries and suggestions. Please feel free to drop any.